How cool would it be to find a way to solve an old mystery, or crack a secret code for the first time?

Well, here's your chance to crack that code. People have been working on this thing for a very long time. Part of it has been solve, but the remainder hasn't. Want to take a shot? 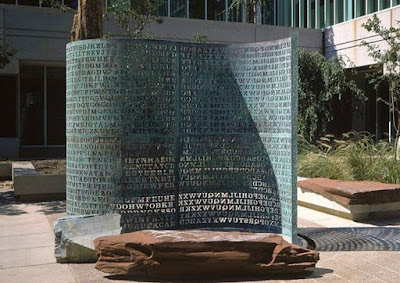 In 1990, sculptor Jim Sanborn set up a sculpture, Kryptos, at CIA headquarters. On Kryptos are 865 characters that make up four coded messages, set up as a challenge for the nation’s brightest to solve.

The first three have already been deciphered. An NSA employee actually cracked it first, as early as 1993. By 1998, a CIA analyst had solved it, and in 1999, Jim Gillogly became the first private citizen to crack the code.

In 2010, Sanborn gave away part of the code: “NYPVTT” should be deciphered as “Berlin.” Four years later, he revealed that “MZFPK” means “clock.”

“There are several really interesting clocks in Berlin,” Sanborn hinted. “You’d better delve into that.”

Amazing how long this monument has gone uncracked, especially given it's location.

Coffee out on the patio today, where Spring seems to have come again!
Posted by HermitJim at 12:00 AM

Guess this tells you how "smart" our people are- not. Can't believe some young kid hasn't cracked the code yet. I would love coffee on your patio. Mine is frozen over - 9 degrees with wind chill at -2.

Well I am not good at these types of things I have no patients to sit and stare at such. But yes you would think since it is located ad such and important place they would have long ago figured it out.

Hey Linda...
Yeah, you would think one of them would jump at the chance to shine.
Thanks for stopping by today!


Hey Jo...
Bet you would be good at it, though.
Thanks for dropping by today, sweetie!

So, what do the first three parts say? Maybe they would be a hint to the last part. . . or maybe not.

Hey Dizzy...
I don't have a clue what the first parts say, but the creator gave some pretty strong hints, I think!
Thanks for the visit today!