A Shrimp Just Showing Off...!

Nature can come up with some fancy camouflage for her critters, but She also can dress them up nice and pretty as well.

This guy doesn't seem to fear that he may be attacked or eaten, so he just lets it all hang out! Kind of in your face, isn't it? 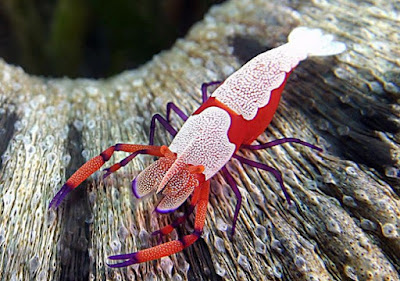 The tiny, colorful emperor shrimp looks looks more like a piece of candy than a living thing, but its striking color serves a very important purpose . . . actually, we have no idea why they’re so colorful, despite the fact that they’ve been studied since 1967. It’s possible that they just have no need for camouflage. Emperor shrimp live almost exclusively on the backs of a type of sea slug known as a nudibranch, specifically the Hexabranchus marginatus, which has few predators because it absorbs toxins from its food. There’s really nothing out there that would attack them anyway, so maybe they’re just showing off.

To me, it looks like the white on his body could almost be lace. Certainly is eye-catching, don't you think?

Coffee in the kitchen once again!
Posted by HermitJim at 12:00 AM

Lace - my first thought. It sure is artistic.

That is such a beautiful animal. The white really does look like lace and I love the purple color on the ends.

What a beautiful creature and like the others first thing that came to my eye was lace.

we are at 42 this morning so cozy kitchen sounds fine

Hey Caddie...
Glad we are of the same mind. Great minds and all that, I guess.
Thanks for stopping by today!


Hey Linda...
Certainly easy on the eyes, isn't it?
Thanks for coming over today!


Hey Jo...
Certainly dressed up for the occasion, right?
Thanks for dropping by, sweetie!

My first thought as that it looked like a crawdad... But much prettier

Hey Rob...
I did not recognize that until you said it, but right you are! Just like a crawdad, but more color!
Thanks for the visit today!