The Watch Of Casey Jones...!

Call it fate or just ironic, but whatever the reason it's never the less amazing that this watch survived.

In case you are unfamiliar with who Casey Jones was, here is a little history that will tell more about him, and why this watch is a great story all it's own. 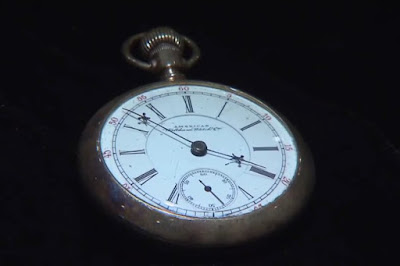 Railroad enthusiasts know the story of John Luther “Casey” Jones, a train engineer who heroically died saving his passengers during a collision near Vaughn, Mississippi. While approaching the station at Vaughn, Jones and his signalman noticed something on the track ahead. They realized too late that it was the tail end of another train that was too long to fit its siding. The signalman leaped from the cab (on Jones’s orders), leaving Casey to his fate. A few seconds later, Jones’s train collided head-on with the other cars.

When Jones’s badly mangled body was pulled from the wreckage later that day, it was found that his pocket watch had stopped at 3:52 AM, the exact time of the impact. Although Jones died as a result of the crash, his actions ensured that he was the only fatality. No one else involved with either train suffered more than minor injuries.

Strange how things like this can just pop up when you least expect them. Another story of a true hero of our past that lives on in only a few hearts and minds.

Coffee in the kitchen this morning...OK?
Posted by HermitJim at 12:00 AM

Hey Jo...
Yeah, it is!
Thanks for dropping by this morning!

Both my granddads where railroaders during the steam engine days. I grew up listening to lots of railroad stories and railroads have been a large part of my life. It even got me a stay in the hospital once. Some day we need to get together and have a great chat.

Hey Dizzy...
Sounds like you may have some railroad in your genes. Some of my distant kin were rail workers as well.
Thanks for coming over today!