Another Woman Of The Wild West...!

Back in the days of the untamed and wild west, women had to learn to be tough and resourceful to survive. That certainly was the case for this next article from Listverse. 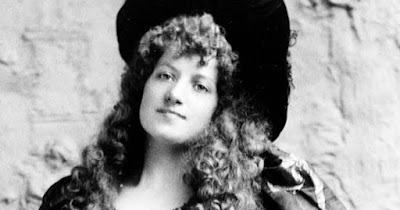 Born Carlotta J. Thompkins, this wild woman was so skilled at poker that she was eventually given the name “Deno,” which was a shortened version of dinero (“money”). Unlike many women who made names for themselves living on the edge of the law during this time, Carlotta was from a wealthy family and from parents who gave her ample care and affection.

She learned to play cards by spending time with her father, a successful gambler and horse breeder. After he was killed in the Civil War, Lottie began her own career at the poker table.

She quickly added fugitive-companion to her resume when she fell in love with Frank Thurmond, also a professional gambler. He was accused of murder, and the two of them went on the lam, happily using poker to support their lifestyle.

The pair ended up in Fort Griffin, a quintessential cowboy town, and became friends with Doc Holliday. Fearful of being caught, Lottie and Frank hid their relationship until they were married years later. In Fort Griffin, Lottie’s fame grew as a poker player who was not to be challenged. She became the subject of songs, paintings, novels, and numerous short stories.

Lottie and Frank were a couple with their eyes on the big picture. They eventually married in 1880, used their savings to invest in a number of legit businesses, and settled in New Mexico. There, they became leaders in their community. Their later life found Frank as the vice president of a bank and Lottie as the cofounder of a hospital.

Well, I reckon that a person can change...especially given enough time and money. Nice to know they became useful members of their community.

Coffee in the kitchen again today. Sorry about that!
Posted by HermitJim at 12:00 AM

Very interesting. Sounds like she was quite a woman:))

Glad they had a happy ending. She sounds very interesting.

Hey Mamahen...
Sure had a mind of her own.
Thanks for stopping by this morning!


Hey Gorge...
Did a lot better tan most in their line of work.
Thanks for coming over today!


Hey Linda...
Bad guys have to win sometimes, I guess.
Thanks for the visit today!

At least they made there gambling a success story and it ended well for them. Not many had happy endings.

I sure don't mind coffee in the kitchen its warm and cozy.

I love stories about the "Wild West". I grew up watching cowboys and Indians on black and white TV. Now, on my satellite TV channels, I have found them all over again. Of course the advertisements come on in color.

It's nice to see a story from back then, about a woman where the whole story is more or less "normal".

Hey Jo...
Turns out they truly had some business sense, all things considered.
Thanks, dear, for dropping by today!


Hey Dizzy...
You know the commercials are going to be in color...and usually louder than the program .
Thanks for coming by today!


Hey Rob...
Kind of a pleasant change , isn't it?
Thanks for the visit today!