This effect was caused by trying to follow a Tesla experiment, so you can only imagine how things went. 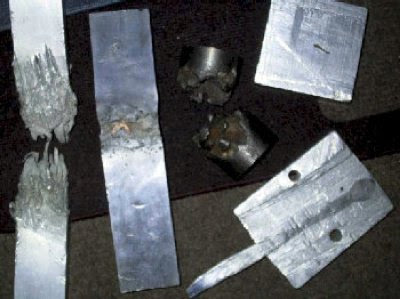 The Hutchison Effect refers to the number of eerie phenomena that occurred when inventor John Hutchison attempted to replicate a few of inventor Nikola Tesla’s experiments. Some of the strange events witnessed include levitation, fusion of objects completely different in matter (such as wood and metal), and disappearances of some smaller objects. Even stranger is that after his experiment, Hutchison was unable to repeat the project again with the same results. This experiment was so popular it even sparked the interest of NASA and the Military, both whom have failed to produce the Hutchison Effect.

I think the fact that the government was interested enough in the samples to try the experiment for themselves says a lot. I watched a documentary on this experiment some time back, and I'll admit I was fascinated by it. BTW, I found this article on Listverse.

Coffee inside again this morning!
Posted by HermitJim at 12:00 AM

Maybe it's a good thing.

Wonder what would have happened if the PTB would have been able to duplicate the experiment? Happy New Years Eve.

Interesting stuff! Rainy here this a.m. Happy New Years Eve...stay safe if you plan to be out tonight:))

They just had a documentary on Tesla the other day but I was busy so missed most of it. He was a strange guy later in life. I missed a lot of his experiments.

It will be nice to have coffee in the kitchen it's still pretty cold. About froze when I ran out to hang humming bird feeder.

HAPPY NEW YEAR my friend and to all who visit Mr Hermit for coffee!

Hey Momlady...
Yeah, maybe it is!
Thanks for stopping by this morning!


Hey Linda...
My guess is that they would try and figure out how to use it in war!
Thanks for coming over this morning!


Hey Mamahen...
Please stay safe to you as well. I'm staying home as usual.
Thanks for the visit today!


Hey Jo...
He was a brilliant man, but he did have his quirks.
Thanks for dropping by today, sweetie!

Hey Jim,
Just wanted to stop by to say Happy New Year!
Wishing you a healthy, wealthy and prosperous 2019!!
Luv ya,
Judy/blondie xoxo

At least we were told that the government wasn't able to reproduce the outcome of that experiment. It may be a military secret. . .