There are so many strange ways being touted to relieve pain and sore joints, it's a wonder we can keep up with them all. However, this is one I sure won't be trying anytime soon. 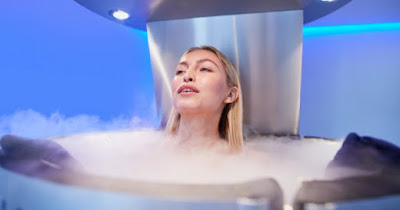 Cryotherapy is a relatively new health craze for the relief of muscle and joint pain. It’s similar to an ice bath except that participants are treated to a 2–3 minute blast of supercooled air inside a cylindrical chamber. (The head stays out.)

While the supposed health benefits are questionable, the practice came under new scrutiny after a freak accident which occurred around Halloween 2015. Chelsea Ake-Salvacion, 24, worked at the Las Vegas spa where the incident took place and decided to do a quick treatment after hours—and alone.

Although the details are unclear, it appears that she lost consciousness and was found dead—frozen completely solid—by her coworkers the next day. According to the county coroner, Chelsea died from asphyxia due to low levels of oxygen.

If it's all the same to you, I'd rather just take a couple of aspirin and lie down for a bit. Besides, I don't care for the cold!

Coffee out on the patio this morning. Temps are supposed to reach the high 60s and Sun is shining!
Posted by HermitJim at 12:00 AM

I get that in NH going out to the wood pile.

Since I really, really don't like being cold, I think I will stick with my Ibuprophen thank you.

Not happening here either.

But some nice hot coffee right now to warm me up will be great we are really into winter in Tucson. So patio sounds wonderful

Hey Sixbears...
Good thing is...you don't even have to pay for it!
Thanks for stopping by today!


Hey Mamahen...
I'm sure with you on that! I feel the same!
Thanks for coming over this morning!


Hey Linda...
Yeah, I'd pass on that treatment as well.
Thanks for the visit today!

Hey Jo...
Only in Vegas would something like that be available, I think.
Thanks, dear, for dropping by today!

I prefer to be cool, don't like being hot. But definitely not that cool. Wouldn't a person get frost bite or burnt from getting in contact with that very low cold temperature?

Hey Dizzy...
I certainly would think so. Anyway, I wouldn't risk it.
Thanks for stopping by today!

Bubba, Believe it or not, we have one of these facilities very near out house here in the 'burbs. Won't find me there, though. I've got the fire going this am!

That's OUR house, not the OUT house. We don't have one of those ~

Cryotherapy For Wart Removal
Also known as cold therapy, cryotherapy is the application of a low temperature in the medical science for therapeutic and other medical purposes.