Nature certainly withholds many a mystery from us for a very long time, and that's a fact. Truth is we are only now starting to understand some of these mysteries. 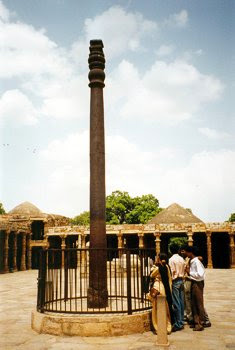 Iron, the king of metal, is used for just about everything from the skeleton of your house to the chains on your bike. Unfortunately, iron can never escape its destiny to slowly transform into rust – with the exception of this phenomenal structure: meet the Iron Pillar of Delhi! Standing in at 7 meters tall and weighing more than six tons, this iron giant has managed to defeat corrosion for over 1600 years! But how can something that is 98 percent iron withstand decaying for over a millennia? Scientists have found the answer to that question, but how ancient ironsmiths discovered the fact so long before us still amazes archeologists today.

I found this little mystery over on Atlas Obscura. Plenty more mysteries there, in case you want to study on them.

Coffee outside one more day before Winter sets back in.
Posted by HermitJim at 12:00 AM

Hey Mamahen...
Yeah, I know. You just couldn't resist!
Thanks for stopping by this morning!

Okay, so what is the answer to the question?

Wow, that is really amazing.

>>The corrosion resistance results from an even layer of crystalline iron hydrogen phosphate hydrate forming on the high-phosphorus-content iron, which serves to protect it from the effects of the Delhi climate.<<

There is a more in depth explanation on the Wikipedia site if you're interested.

Hey Momlady...
Rob found the answer over on Wikipedia. Easier if you just follow the link and read it, I think.


Hey Linda...
It really is! Seems like my tools can rust almost overnight here.
Thanks for the visit today!


Hey Rob...
I appreciate you looking that up for me. Guess I was just too lazy to do it.
Thanks for stopping by today!

We tend to underestimate the intelligence and ability of our ancient ancestors. They didn't have as much history to learn from. Yep, they were the ones that made our history, so we could build on it.

Interesting how ancients found ways to do these sort of thing.

Hope the coffee is good and hot it is down right cold here this morning.34degrees.

Hey Dizzy...
They were pretty smart ibn that part of the world, that's for sure.
Thanks for the visit this morning!


Hey Jo...
Like I said, smarter than we give them credit for...which is a good thing.
Thanks, dear, for dropping by this morning!