Ever wonder just how some folks can tell when you are telling a fib, or trying to hide an emotion? There is a very good reason...you are telling on yourself in living color! Here is the story from Listverse! 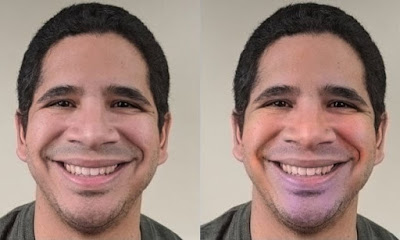 In 2018, researchers proved that idioms such as “green with envy” were not just prose. Depending on the emotion, human faces really do change color. This chameleon habit, which is linked to blood flow, is very subtle. Most of the time, hues are so light that other people only subconsciously pick up on the person’s true emotions.

The affected areas curve around the eyebrows, cheeks, chin, and nose. With the help of a computer program and an understanding of how humans see color, scientists revealed facial rainbows for the first time.

Disgust bloomed as a blue-yellow shadow around the mouth and colored the forehead and the nose with red-green. Happiness infused the cheeks and temples with red but tinted the chin blue. Strangely, “surprise” was close to “happiness,” with a redder forehead and a chin with less blue.

Looking at pictures of a neutral face, volunteers were mostly able to pick the right emotion when its colors were superimposed on the image. Other pictures showed the wrong shades for an expression—for example, happy colors on an angry face. But the volunteers instinctively felt that something was wrong, although they could not say what.

Probably a good thing to work on improving now that the holidays are almost here. You don't want your true feelings to show too much when your better half gives you that ugly hand made sweater...right?

Coffee in the kitchen this morning. Lemon creme cookies are handy!
Posted by HermitJim at 12:00 AM

Labels: your face tells the truth

Guess I'm keeping the beard and sunglasses along with the wide brimmed hat. Nobody will know what I'm thinking.

I think I really don't show much expression on my face except anger. Cold day again today but sunny.

Interesting. I've been told I rarely show any emotion. My stepmother once told me that someone made the remark "Kinda dead inside, isn't she." I learned at an early age.

Well I'm a tell it like I see it kind of person so I wonder what color that is?

Not to cold here this at 55 lemon cream cookies

Hey Sixbears...
That should certainly help. Beards can hide a lot.
Thanks for stopping by this morning!


Hey Linda...
As long as you have the sun, you can make out OK.
Thanks for coming over today!


Hey Momlady...
In some cases that's a good thing...right?
Thanks for the visit today!


Hey Jo...
That's a very good question, sweetie.
Thanks for dropping by this morning!

"They" can tell if you're happy, sad or telling the truth just by the colors on your face?

In another few years with all the cameras, computers, software to recognize faces and now ways to tell your moods there will be no place to hide in this world...not even in your own head.

It's 40 some degrees out this morning in my part of Florida, coffee inside sounds like a fine idea!

Hey Rob...
It does seem to become harder every day! Pretty scary, huh?
Thanks for stopping by today!

The older I get the less I try to hide my emotions. I can't hurt your feelings, only you can hurt your own feelings. Therefore, knowing this, my feeling don't get hurt very often, if ever.

Hmmmp...may have to start wearing a mask. I wonder how much makeup would interfere with the color change?...In late today...28° as we "speak"...hope there is a cookie left:))

Hey Dizzy...
I think that at our age, we don't care what people can read on our faces. Just ask us and we will tell ya!
Thanks for coming over today!


Hey Mamahen...
Good question about the make-up. Plenty of cookies left, so you are good!
Thanks for dropping by this morning!