Sounds like the title of a really bad horror flick, doesn't it? Well, I guess in a way it is just that! Definitely not something I want to happen around my neighborhood. 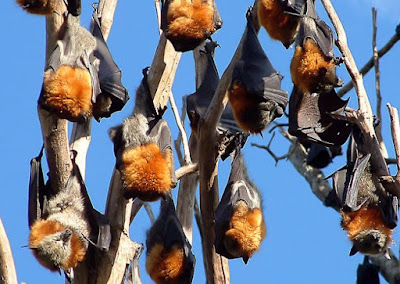 In May 2016, the town of Batemans Bay in New South Wales was invaded by 100,000 massive bats that covered nearly every tree and surface in the area. Residents were left prisoners in their own homes because opening doors or windows would cause bats to come flying in.

The culprits were grey-headed flying foxes. They are listed as a vulnerable species, so authorities couldn’t kill them. Soon, different groups bickered about what to do. Authorities wanted to use smoke or noise to try to get the bats to leave while animal rights groups said that the townspeople needed to be patient and wait out the epidemic.

Eventually, the town received $2.5 million to help fund efforts to stop the bats. But as of June 2016, the town remains under siege.

I can only imagine what a nightmare this must have been for the folks living in this town. BTW, I got this article from Listverse.

Oh my! Gives me chills thinking of it. The kitchen will be just fine:))(

Crazy. Another cold morning in the mountains. Got the coffee perking on the woodstove so there's hope.

Not enough room in the bat house here. Would love some coffee.

Flying bats are not on my list of critters I want hanging around.

Hey Mamahen...
Not a very pleasant picture, is it? The stuff of nightmares.
Thanks for stopping by today!


Hey Sixbears...
At least you have coffee, right?
Thanks for coming over today!


Hey Momlady...
You might need to add a few more bat houses for something like this!
Thanks for the care package, my friend, and for the visit as well. Both are greatly appreciated!


Hey Linda...
Not real high on my prefered critter list, either!
Thanks for coming over this morning!

I wouldn't care what the activist had to say they wouldn't last long in my neighborhood and I'm not one for killing needlessly but this is nuts.


34 here this morning so lots of hot coffee is needed.

I am sure that they (their ancestors) were there way before humans were.

Hey Jo...
I hear ya and vote the same way, dear. Not many of those activist live in the area, I'll bet!
Thanks, sweetie, for dropping by this morning!


Hey Dizzy...
And will probably be there long after we are gone.
Thanks for the visit today!

They're adorable! They look like fuzzy, Halloween-themed fruit! I just want to reach up, pick one, and love it until it tries to free itself but can't figure out how because it's all rapped up in my hugs! In a high-pitched voice, it would shout, "Stop touching me! I am the night!!!"