I think that we are all aware that Mother Nature can be harsh at times, but here is a case where she almost outdoes herself. 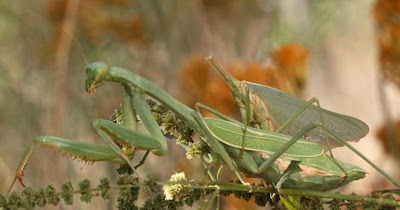 I realize the urge to reproduce is very strong, but after all...it's still pretty harsh!

Coffee in the kitchen this morning...OK?
Posted by HermitJim at 12:00 AM

And we think our relationships are tough!

Mother nature is not to be tobe taken lightly! Rain again here for a couple of days, but at least its not snow:))

That is rather rough sex if you ask me. haha

Hey Sixbears...
Not hard to see who is the dominate one there.
Thanks for stopping by today!


Hey Mamahen...
Certainly no romance, but straight to business!
Thanks for coming over today!


Hey Linda...
Can't get much rougher than that.
Thanks for the visit this morning!

I bet a lot of human wives would like to do that every now and then. But let's hope they just do it with words. . .

I've read this before and also the black widow kills her mate.

Kitchen is fine by me I made some Oatmeal,raisin cookies I'll bring some over.

Sorry to interrupt your blog comments Jim, but I sent you an email a few days ago and never heard back. Did you not receive it or maybe it went to spam?
Let me know and I can dig it up and resend.
Hope you're doing well :)
Judy / blondie

Hey Dizzy...
Yeah, it's bad enough with words, I would think.
Thanks for stopping in today!


Hey Jo...
Guess in some cases it just isn't safe to me a male.Thanks for dropping by today, dear!


Hey Blondie...
I did get the email yesterday and just answered them. sorry for the delay, my friend!