Now you may think that doing railroad work is a job that only can be done by humans, but Jack proved to be a very talented helper for his co-worker and friend, Jumper Wide. Here is the story from Listverse. 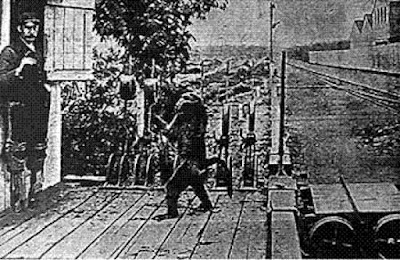 Disqualified as a non-ape, Jack was a capable baboon from South Africa, who worked as the personal assistant to a Cape railroad employee named Jumper Wide, who had lost both his legs in a train accident. Working at the station, Jack initially helped with the day-to-day mobility of the crippled Wide, but was subsequently trained by Wide to operate the trains’ switches, essentially to perform all of the duties of a hired, human signalman.

Understandably, many arriving at the station were amazed to see a baboon at the controls, and one woman fainted at the sight. The situation was investigated by the governmental authority, and Jack proved to be extremely proficient and reliable at his post, and was allowed to keep the job. He was even given an employee number and compensation.

The story of Jumper Wide and Jack is a tender tale of human-animal friendship, and Wide was deeply grief-stricken when Jack succumbed to tuberculosis and died, in 1890. Jack’s skull remains on display at the Albany Museum at Rhodes University near Port Elizabeth.

I wonder why we don't try and encourage more teams of workers like this anymore? Seems to be a fairly sensible pairing to me, but then what do I know?

Coffee outside again this morning, where the temps on the patio are going to be around the mid 70s.
Posted by HermitJim at 12:00 AM

The lady gets off the train & sees that a monkey was doing all the directing & faints... You can't make that stuff up!

That was a good one Mr Hermit!!

Enjoy your coffee outside, in this part of northern Florida it's damp out so I'll continue to read blogs & drink my coffee inside.

I can understand the woman fainting...I might in her place. Good post...43 here today, but rain...At least its warmer:))

There are human that couldn't do that job. Good story.

Good post this morning, they say they are very integent and this proves it.

Mamahen your warmer than we are at 40 here this morning, so far no rain. Patio sounds like the place to be

Hey Sixbears...
Now that you mention it, so have I.
Thanks for stopping by this morning!


Hey Gorges...
Glad you found it so.
Thanks for coming by this morning!


Hey Rob...
I reckon that it was a bit startling, at that.
Thanks for the visit today!


Hey Mamahen...
At least it isn't snowing, right?
Many thanks for stopping in!


Hey Momlady...
You are so right, my friend.
Thanks for coming by today!


Hey Jo...
Smarter than some folks I know...better looking too!
Thanks for dropping by this morning, dear!

Back when part of my job was running network cabling through ceiling and floor crawlspaces, I longed for a trained monkey. I could tie the cable to his little monkey-belt (which surely all moneys wear) and he could run through the space, dragging the cable. Also, tracing out faulty cables.