This post is pretty weird if you go by the title, but scary if it were to happen to my neighborhood. I think I have said before that I don't care for spiders, so I sure don't want to be in a place where it's raining the little buggers! 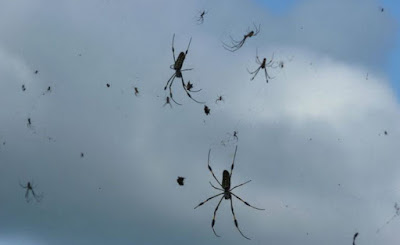 In 2015, the residents of Goulburn, Australia, experienced a mysterious phenomenon that had them wondering if they were being invaded by spiders. It actually rained spiders. Overnight, many areas of the city got covered in webs and millions of baby spiders. Thankfully, the spiders were harmless.

The mystery didn’t last long, though. Martyn Robinson, a naturalist from the Australian Museum, immediately gave a scientific explanation. According to him, the residents of Goulburn had experienced ballooning, a dispersal technique that spiders use to migrate.

This special ability to harness wind and a streamer of silk is the reason why all continents, even Antarctica, have spiders. However, due to the extreme temperatures of the Frozen Continent, the spiders that end up there eventually die.

I got this article from the scary folks over at Bustle.com. Great stuff to study there.

Coffee in the kitchen this morning. Winter has come back.
Posted by HermitJim at 12:00 AM

Given the amount of rain we have had this year, in thankful it was all of the liquid variety! 35° here this a.m. so the kitchen it is:))

Generally spiders don't bother me. However, I don't think I would enjoy it raining spiders. That would creep me out. Only 28 degrees here, so kitchen sounds good.

How very strange! The little buggers are more clever than one would give credit .

Raining spiders? That would make a day to remember .... in the "never again" column! It's a real good thing they were not harmful like those spiders in Finland.

Hey Mamahen...
I certainly hear ya there.
Thanks for stopping by this morning!


Hey Linda...
It would make me more than a little nervous, to say the least.
Thanks for coming over today!


Hey Momlady...
They certainly seem to have solved the transportation problem.
Many thanks for the visit this morning!


Hey Rob...
Boy, ain't that the truth!
Thanks for stopping by this morning!

That is very creepy, I'm afraid of them but that many all at once I'll pass.

Just had to put the trash on the curb and I thought my ears would fall off it so cold. Suposed to warm up to 70 today that will be nice. But right now some nice hot coffee will be perfect and sittine with my special friend and all others friends who are at the table.

Hey Jo...
Turned pretty chilly here as well. I feel the same about the spiders.
Thanks, dear, for dropping by today!