Sometimes we might wonder just what caused the bad guys of the Old West to become bad in the first place. Often the truth is easy to answer...being law abiding can be a lot of work! 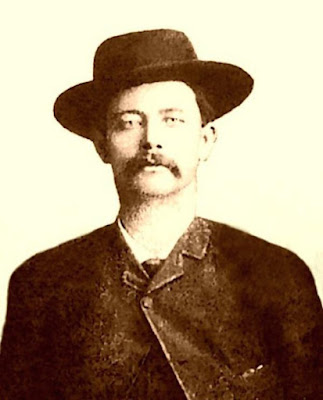 Sam Bass started out an honest man. He had a simple and modest dream of moving to Texas and becoming a cowboy. Eventually he did just that, but decided after one season he didn’t like it. While transitioning from simple farmer to famed outlaw might be a stretch for some, Bass did it seamlessly. He began robbing banks and stagecoaches, and became rather proficient at it. After his 7th stagecoach robbery, Bass and his gang turned their sights on bigger prizes and decided to rob trains. They eventually robbed the Union Pacific gold train from San Francisco, netting over $60,000, which is to this day the largest single robbery of the Union Pacific. He was wounded by Texas Rangers on the way to rob a small bank in Round Rock, and died two days later on his 27th birthday.

I got this information from a site called Thechive. You might want to check it out!

Coffee in the kitchen this morning. Biscuits and honey anyone...?
Posted by HermitJim at 12:00 AM

All that money from the train robber should have been enough to live a long time back in those days. But greed got him in the end just like most of the others.

Biscuits oh yum on my way

I agree with Jo on the greed issue, or maybe an adrenalin junkie...Save me a biscuit and a seat:))

Greed seems to be a recurring theme from back then. Biscuits and honey sound good to me. We are expecting a freezing rain/snow mix today. UGH!!!!

Dang, if I had known that you were having biscuits and honey I would have been on I-45 heading south to Houston. The only thing better is biscuits and white gravy. Oh my, now you got me hungry again.

Hey Jo...
Seems like most of these types just don't know when to quit, or just don't want to.
Thanks, dear, for dropping by this morning!


Hey Mamahen...
I'm sure that greed had a lot to do with it.
Thanks for stopping by today!


Hey Linda...
I believe you are right about that.
Thanks for coming over today!

Hey Dizzy...
I do like biscuits and gravy as well, any time of the day!
Thanks for the visit today!