We tend to think that toy cars and the like are a fairly new invention, but you might be surprised to learn that they can be from long ago...like from 5000 years ago! Does that surprise you? It did me! 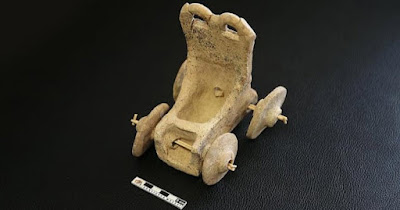 A cache of 5,000-year-old children’s toys was unearthed at one of the world’s oldest settlements. It includes the world’s earliest toy “car”—an earthen, four-wheeled chariot.

Researchers discovered the toy carriage inside a complex of tombs in the city of Sogmatar, Turkey, then a necropolis and religious center dedicated to the Moon god, Sin. One of the tombs, likely a child’s grave, featured the wheeled toy and a rattle with a bird motif.

Like the chariot, the rattle is the oldest of its kind. Few could afford such sophisticated toys, so they were probably made for the children of kings or other Bronze Age hotshots.

The good thing about the modern version of these toys is that they are probably a lot more durable than the others. Most are probably cheap enough and common enough that you don't have to be a King's kid or hotshot to afford them.

Coffee out on the patio this morning. Temps are supposed to be in the 70s.
Posted by HermitJim at 12:00 AM

That's pretty amazing! 33° Here at the moment, so your warm patio sounds nice. I'll bring an assortment of Christmas goodies to share:))

That is a very interesting find. Who would have thought they had such toys that long ago.

Wow! That's old. Can't believe how warm it's been here. Package on its way, HJ. Hope you have a Merry Christmas.

Hey Mamahen...
I really like sharing Christmas goodies, especially ther homemade ones.
Thanks for stopping by today!


Hey Gorges...
Glad you liked it.
Thanks for coming by today!


Hey Linda...
I was sure surprised at the find, that's for sure.
Thanks for the visit this morning!


Hey Momlady...
Not something you would to find from that period, that's for sure.
Thanks for thinking of me and for coming over today, my friend!

Well that is interesting.

It is reading 42 here but from all the heavy frost on roofs and the person's car parked on the street last night I say someone is wrong. So I am on my way to the patio

I don't know how long our plastic junk toys are going to last. 10 degrees and windy here this morning, but the coffee is on the woodstove so everything is fine.

I guess kids throughout all of human history have had toys to play with. Had to keep them quite so the saber tooth tiger didn't get them (grin).