I know quite a lot of folks out there collect all sorts of things, but I admit that this is a new one on me. I think you'll agree that this article from Listverse is a perfect tale for Freaky Friday.


The Pits Of Severed Hands 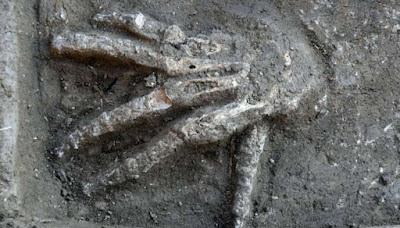 In a Hyksos palace in Avaris, Egypt, an archaeologist found four places where pits had been dug and filled with severed hands. There were 16 in all, chopped off of their victims before being brought to a palace and buried underground. Every hand was from a different person.

The biggest pit was right in front of the throne room, dug in a place where the hands would be closest to the king. They had been buried there 3,600 years ago when the palace was ruled by King Khayan. It seems he liked to keep a collection of his enemies’ severed hands.

The discovery wasn’t entirely a surprise. Archaeologists had already found pictures across the area that showed soldiers trading the severed hands of their enemies for a package of gold. This, it seems, was how bounties were collected by the Hyksos. The king would reward these killers with gold—and he would keep the hands in his own home.

I may have some strange things around my house, but severed hands certainly isn't one of them...at least, not the last time I looked.

Coffee or hot chocolate in the kitchen this morning!
Posted by HermitJim at 12:00 AM

I wouldn't want any part of my enemy around me. That's just morbid.

A fitting for the "middle of December" Friday!

You do have a talent for finding weird stuff, Mr. Hermit.

Hey Mamahen...
It is morbid, for sure. I don't want to have them that close...even in death.
Thanks for stopping by this morning!


Hey Rob...
Seems that time passes faster and faster, the older I get. Wonder why that is?
Thanks for coming over this morning!


Hey Momlady...
I like to think of it as a special talent.
Many thanks for the visit this morning!

Those folks back then were pure nasty, feeding live people to lions and other horrible things,Rome, England etc. blood thirsty.

There is no animal on earth that is more cruel as the human animal. I am hoping that that is the exception instead of the rule.