Mother Nature works in Her own mysterious way, and some of these mysteries don't seem likely to ever be solved...at least by human research. I guess that's the way it is supposed to be. 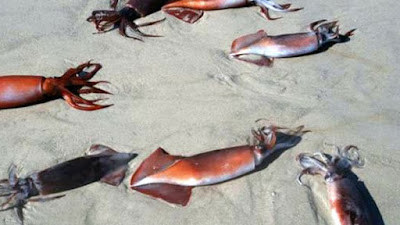 In January 2005, thousands of Jumbo squid beached beached themselves on California shores. Very little is known about these squid, as they live at depths of up to 2,300 feet (700m), making it much harder for scientists to ascertain why they would suddenly engage in a mass suicide. Toxic poisoning is one theory, although if the water had been contaminated, more than squid alone should have been affected, and if it was something they ate, it is unlikely that so many would have been involved. A similar event occurred in San Diego in 2002, with toxins being the leading (but unconfirmed) suspect in that case too.

Like I say, maybe we just aren't supposed to know why these types of things happen. I reckon that some things are best left alone, ya know?

Coffee in the kitchen this morning. Chilly outside...
Posted by HermitJim at 12:00 AM

That is really weird.

Hmmm...very strange indeed. Why do lemmings throw themselves off cliff? Overpopulation? Who knows?

Hey Mamahen...
It is strange, isn't it?
Thanks for coming by this morning!


Hey Linda...
Almost to the point of being creepy, right?
Thanks for stopping by this morning!

Hey Momlady...
As I said, some things are best left unknown, and nature certainly has her own way of dealing with her unknowns.
Thanks for the visit this morning!

Wikipedia also labeled them "aggressive" to man but if they live that deep who is going to see them if you haven't actually caught one & being caught might piss the creature off...

That's another great find all in all!

I'm good with coffee in the kitchen, since there isn't any global warming problem I guess its normal to see this kind of cold for the Southwest.

Hey Rob...
I know I don't5 want to mess with one, for sure. Don't think I'll be using one for bait either.
Thanks for the visit!


Hey Jo...
Seems that we are getting more than our share of cold this Winter.
Thanks, dear, for dropping in today!

I hadn't thought about a 4 foot long squid being used for bait... that should take a BIG hook!

Whoa! What if that BIG hook and 4 foot bait fish actually caught something? What to do you catch with a bait 4 foot long?

With that question this subject has gone from "great" to "REALLY Great!"

Our World Wars would look like a bunch of humans committing suicide. Sometimes life forms blindly follow a leader who does not have their well being as a priority.

Hey Rob...
What ever it would be, I don't want to be in the boat that was trying to carry it!
Thanks again!


Hey Dizzy...
As much as it pains me to say this, I have to agree with ya!
Thanks for coming by today!