Here is something special for Monday Mystery, one provided by nature...or so some folks think. 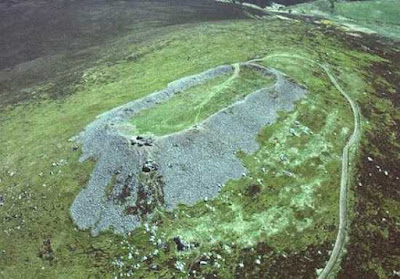 In 1777, a man named John Williams, who was one of the earliest British geologists, described the phenomenon of vitrified forts. Vitrified forts are the name given to a type of crude stone enclosure or wall that shows signs of being subjected to intense heat. The structures have baffled geologists for centuries because people can’t figure out how the rocks were fused together. There is currently no accepted method for the vitrification of large scale objects. “The temperatures required to vitrify the entire fort structures are equal to those found in an atomic bomb detonation.” Hundreds of vitrified fort structures have been found across Europe and 80 such examples exist in Scotland. Some of the most remarkable include Dun Mac Sniachan, Benderloch, Ord Hill, Dun Creich, Castle Point, and Barra Hill.

The forts range in age from the Neolithic to Roman period. The structures are extremely broad and present the appearance of large embankments. The process used to develop the walls is thought to have involved extreme heat and many structures show signs of fire damage. However, vitrification is usually achieved by rapidly cooling a substance. It occurs when bonding between elementary particles becomes higher than a certain threshold. Thermal fluctuations break the bonds, therefore, the lower the temperature, the higher the degree of connectivity. The process of vitrification made headlines in 2012 when scientists used it to preserve organs and tissues at very low temperatures.

Many historians have argued that vitrified forts were subjected to carefully maintained fires to ensure they were hot enough to turn the rock to glass. In order to do this, the temperatures would have been maintained between 1050 and 1235°C, which would have been extremely difficult to do. It is also uncertain why people would have exposed the structures to such intense heat because when rock is superheated, the solid becomes significantly weaker and brittle. Some scientists have theorized that the vitrified forts were created by massive plasma events (solar flares). A plasma event occurs when ionized gas in the atmosphere takes the form of gigantic electrical outbursts, which can melt and vitrify rocks. During solar storms, the Sun is known to occasionally throw off massive spurts of plasma. As of 2012, vitrified forts remain one of the strangest anomalies on Earth.

Just one more secret being kept from us by Mother Nature, although we really don't need to know. Just enjoy them as a landmark, I would say!

Coffee in the kitchen this morning!
Posted by HermitJim at 12:00 AM

I can imagine temperatures that hot in Texas, but not Scotland. I wonder of the bottom of the fort features the word "Pyrex".

Think I will just enjoy the structures and not tax my brain thinking about how they got there. Merry Christmas.

Like you said, Mother Nature has her mysteries. I let her keep them. Hope you have a great Christmas and may the New Year bring health and happiness.

Hey Ashley...
I never figure it getting hot in Scotland either.
Thanks for coming over today!


Hey Mamahen...
Glad you found it so!
Thanks for stopping by this morning!


Hey Linda...
I'm totally with you on that.
Thanks for the visit this morning!


Hey Momlady...
I think that's the best thing to do. Can't tell you how much I appreciate the care package. I always enjoy the goodies inside, my friend!
Thanks for coming by today!

Merry Christmas my Special Friend, and all who come here for coffee each morning.

Super heated rock structures across Europe with many in Scotland... I looked a map, maybe a solar flare like the article mentioned? https://goo.gl/maps/oDCooRiu1Lt
I can't see it & they are from different times... The Romans left history and I'll bet there was no mention of it.

Another one of those odd, odd, odd happenings... I'm amazed by how we don't have a clue about!

MERRY CHRISTMAS HJ and thank you for your hospitality and cheerful welcome everyday:))

Hey Jo...
And a very Merry Christmas to you , dear!
Thank you very much for dropping by today!


Hey Rob...
Sure leaves a lot of room for speculation, right?
Thanks so much for coming over today!


Hey Mamahen...
I'm always glad to see my friends come over and visit.
Thank yo for stopping and Merry Christmas!

The aliens zapped it from a flying saucer.