About That Holiday Coming Up...!

If we were to do a bit of digging into the history books, we might find that we celebrate at te wrong time.

It's a bit confusing, but the real history of the signing of the Declaration has a much more interesting history than we know. 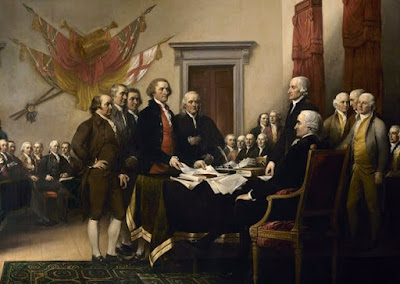 The story: On July 4, 1776, a group of prominent men signed the Declaration of Independence, an important document in the formation of the United States of America.

How it actually went: Everything in this sentence is true—except the date. The document was officially announced on July 4, which is why Americans celebrate Independence Day on that date. But it wasn’t until a month later that the document was signed and complete.

The Declaration of Independence was actually signed on August 2, 1776. The Second Continental Congress first voted the document into authority on June 2.

Then they spent the next two days clarifying the wording of certain parts. After that, the document went through a process of embossing and the finished copy was finally ready to be signed three weeks later.

I got this info from the folks over at Listverse. I figured you might find it interesting!

Coffee out on the patio today! Hot but dry...
Posted by HermitJim at 12:00 AM

That was very interesting. Don't think they told us that when I toured Independence Hall in PA. Have a great weekend.

Thanks for the info, Bubba. I actually thought it took a little longer than that to get all of the signatures. Coffee sounds good. I have a chocolate cake still warm from the oven. Interested?

Now that is interesting and I'm sure at some point we learned that in school but heck the was a very long time ago for some.

Hey Linda...
Maybe they were trying to simplify the whole thing so we peons could understand it, ya reckon?
Thanks for stopping by today!


Hey B...
I don't know about anyone else, but I do love me some chocolate cake! Being warm from the oven is a major plus!
Thanks for coming over this morning, sis!


Hey Jo...
I don't remember being taught about that. May have happened, but like you say, that was a long time ago!
Thanks sweetie, for dropping in today!