So many of the everyday things in our lives just appear to be ageless that we never stop and consider their origins. Some of these simple commonplace tools have a very interesting origin. Items such as the pencil... 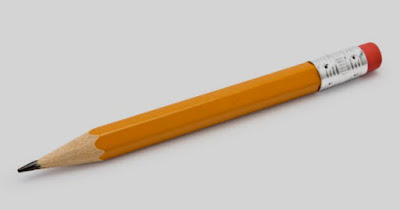 An ancient Roman writing instrument, the stylus, gave rise to the modern pencil. Some early styluses were made of lead. When graphite was documented in Borrowdale, England, in 1564, the mineral replaced the heavy metal. Graphite left a darker mark on papyrus, but it was so soft that it crumbled easily. To protect the graphite, a holder had to be fashioned for it. The first holders were nothing more than string wound around graphite sticks. Later, hollow wooden sticks replaced the string, and the early modern pencil made its historical debut, its mass production following in 1662 in Nuremberg, Germany.

Although Henry David Thoreau made his own pencils, the first one to be machine-made was manufactured by William Monroe in 1812, when war with England put an end to English imports. By the end of the 19th century, pencils were being mass-produced in the United States. Made of red cedar, they weren’t painted until 1890, the better to exhibit their fine finish. When they began to be painted, bright yellow was chosen because the color is associated with Chinese royalty, and the finest graphite came from China. Yellow pencils signified the royal quality of the mineral.

Who would have ever suspected that the wooden pencil had been around that long? Not I, certainly ! Another surprising fact from the folks over at Listverse ! Thank you again !

Coffee out on the patio again this morning, OK?
Posted by HermitJim at 12:00 AM

You come up with the most interesting info. Thanks, HJ.

That was a great subject! As I read I had two thoughts.. the first was mass produced in the 1600s? The second was machine made in the 1800's?
I've always assumed machines were used for "mass production".

Coffee on the patio sounds like a fine idea!

I had no idea that pencils were that old. Very interesting lesson from you this morning. Coffee on the patio sounds great; I'll bring a coffeecake to share.

Hey Momlady...
I sure have a lot of fun finding stuff t share with ya'll! Heck, sometimes I even learn something!
Thanks for stopping by this morning!


Hey Rob...
What about the idea that Thoreau made his own pencils? How do you learn something like that?
Thanks for coming over this morning!


Hey Linda...
Yeah, I didn't realize their age either. Like I say, I learn something in researching these post!
Thanks for the visit today!

I didn't have any idea pencils were that old either. Se we always learn new and interesting things when we come over here for coffee. Patio sound like a great idea before the heat cranks up

As always, informative and interesting. I wish I remembered half of what I learned from you as I'm too lazy to research stuff myself. I wouldn't think to research half the stuff you find anyway. Love you, Bubba. Coffee sounds very good.