How many times do we read about someone getting a taste of some good Karma? Not often enough, that's for sure. 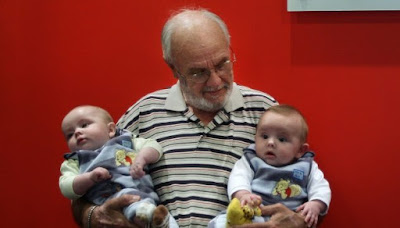 When James Harrison was 14 years old, he nearly died. It took a major chest operation to save his life. The surgeons had to remove one of his lungs, allowing 2 liters (0.5 gal) of blood leave his body in the process. He only survived, Harrison understood, because people he’d never met had donated the blood that now filled his body—and he wanted to do that for someone else.

Harrison resolved that, as soon as he was old enough, he would donate blood as often as he could. He went through with it, donating his first pint of blood on his 18th birthday.

Doctors started to realize, though, that Harrison’s blood was unusual. It had antibodies that were basically the cure for rhesus disease, a blood disorder that can cause babies to be born with crippling brain damage or even die.

They asked Harrison to donate plasma regularly and let them run tests, and he agreed. His blood became the cure. Harrison, now in his seventies, has saved the lives of more than two million babies.

He didn’t just save stranger’s lives, though. When his own daughter, Tracey, became pregnant, she was diagnosed as being at risk for rhesus disease. Harrison’s blood donations ensured that her baby was born safely. Because he donated blood when he was 18, James Harrison was able to become a grandfather.

People like this are true heroes, that's for sure. Anyone that voluntarily gives blood, gives life! That's my opinion, anyway.

Coffee out on the patio again this morning. Think of it as a caffeine transfusion!
Posted by HermitJim at 12:00 AM

My regular donations are minor compared to this guy, but I know they are still valuable. Bless him, and those wgo do what they can.
Big hugs, Bubba.

What a true hero. I have always felt that if you are able to donate blood you should. I'll take that caffeine transfusion this morning, I really need it.

Wish I could donate but have been turned down because of an irregular heat beat (which my doctor says has nothing to do with donating). Guess they don't want to take a chance of something happening. I've had this heartbeat forever and it hasn't had any effect on my health (luckily). Oh well, their loss. Btw transfusing caffeine as we speak.

Hey Sis...
I'm sure that all donations are greatly appreciated...and needed!
Thanks for stopping by today!


Hey Linda...
If you can, then you should. Unfortunately some of us can't donate, but we can help in other ways.
Thanks for coming by this morning!


Hey Momlady...
I don't understand why the heartbeat would make any difference as far as donating blood is concerned. I have an irregular heartbeat as well, but at least it's still beating!
Thanks for the visit this morning!

What a wonderful story. Thank You Sir.

I have already been out side setting up a couple water stations for the birds, with this heat they need to be able to find water it is so dry. So caffeine transfusion is so needed at this time.

Hey Jo...
My cats drink out of the birdbath from time to time...I don't know why. I keep water out for them all the time.
Thanks, sweetie, for dropping by today!

Wow, just wow. Sometimes the efforts of just one simple man make all the difference.

Hey Gorges...
Glad you found it so, my friend.
Thanks for stopping in today!


Hey Sixbears...
Pretty amazing, isn't it?
Thanks for the visit!

Hey Rob...
Yep...pretty much covers it!
Thanks for coming over today!