This story just shows how naming the animals around us can be more satisfying both to the animal and beneficial to us humans. I reckon every farm that was dependent on a milk cow already knew this.

My Aunt Blanche had a cow that came when she was called by name. The cow was almost treated like a member of the family and was even sang to while being milked. It was soothing to her, I reckon. 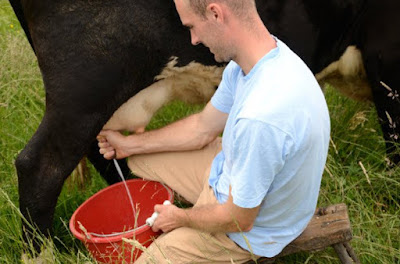 Dairy farmers could potentially increase their incomes with one simple but weird trick—give their cows names. A scientific study published in Anthrozoos suggested that cows with names produce more milk than their nameless counterparts.

This bizarre study was conducted by Drs. Catherine Douglas and Peter Rowlinson of Newcastle University, and it involved over 500 dairy farmers from the United Kingdom.

Many dairy farmers have long suspected that giving their cattle some “one-to-one attention” increases milk production, but this research was the first that tried to prove it scientifically. According to the study, cows that are herded as a group also produce less milk.

Doubting these facts? Speak your pet's name and watch their reaction. They can recognise it, even if spoken quietly. Animals respond favorably when treated kindly as do most people, ya know?

Just makes sense to me. If I am greeted by name my response is a lot more friendly. So why not a cow. Any animal that is treated well is a lot more responsive than one treated badly. And they needed to spend money on a study to find that out. DUH!!!!!!

Even kittens and puppies react to names. I'll bet humans would not react as well to being numbers instead.

Be hard to do on those factory farms with hundreds of cows..

Even the family on Alaska-The Last Frontier name their milk cows. It seems to me that many animals on Aunt Blanche and Uncle Bill's ranch were treated as family members, most in fact. Mayhaps they liked their animals more than some kin!???

Hey Linda...
I have to agree with ya on that. Shouldn't need a study for the answer.
Thanks for stopping by today!


Hey Momlady...
Funny how that works, isn't it?
Thanks for coming by this morning!


Hey Rob...
I reckon you're right about that. Guess they pass on giving out names!
Thanks for the visit today!

Sounds reasonable to me. Beth I loved that show but gave up Directv so I will really miss watching, I will always remember half n half the milk cow.

Hope it's nice on the patio, sure hasn't been nice here 107 yesterday. Run errands very early and get home.

Hey B...
They probably did! Besides, they had a good working relationship with their animals.
Thanks, Sis, for coming over this morning!

Hey Jo...
Pretty nice on the patio right now. Only up to 85 at noon. At least the patio has shade.
Thanks, sweetie, for dropping by today!

When I was a kid, I used to love visiting my uncle's farm. He had all his cows named. My favorite was oddie. It was odd colored for the kind of cow it was but it was nice and gentle and would let me milk her. Yes, I talked to her.