We don't often have a mystery involving planes as much as we do boats and ships, so today lets fix that.

This one is different due to the fact that when the plane went down, it's location was known. But then, it disappeared. How strange is that? Here is the story about this missing flight. 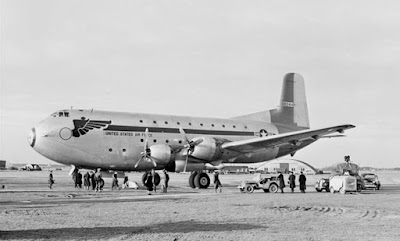 This is a strange one. On the late afternoon of March 23, 1951, a US Air Force Douglas C-124 Globemaster II on its way to England ditched into the ocean. An explosion in the cargo hold and the ensuing fire forced the pilots to put the plane down in the Atlantic, a few hundred miles from Ireland. The exact location was radioed by the pilots, and the ditching itself was successful.

The 53 passengers and crew aboard the flight donned life preservers and climbed aboard well-equipped emergency rafts. A B-29 had already been en route with the intention of aiding the plane in its navigation to the nearest airfield. When it arrived at the location transmitted by the pilots, the crew of the B-29 observed the passengers and crew in their rafts. It seemed everyone was okay.

The B-29 then had to return to base, as it was running low on fuel. However, when rescue crews arrived, the plane and the stricken passengers had all disappeared without a trace. All that was left was a piece of charred plywood and a briefcase. Nobody knows what happened in those hours while help was on the way.

Coffee out on the patio this morning, while it's still sort of cool.
Posted by HermitJim at 12:00 AM

Pirates? Very strange that everything and everyone just vanished.

Yes a quick sit on the patio for coffee and then cave time expecting 114 today, mornings aren't as cool now.

Hey Linda...
It is a strange thing. You would think that there would be something left to hint at what happened.
Thanks for stopping by today!


Hey Jo...
I don't think pirates were that big a deal back then, especially around Scotland. Just another mystery to ponder, I reckon!
Thanks, sweetie, for dropping by today!

Yes, very strange. Although it didn't involve boats and ships, it did involve the ocean. A lot of strange things happen at sea. Oceans cover the largest percentage of this world and that is a lot of area, for sure.

It's a big ocean out there. Anything can happen. Even so, it is strange for the military to lose track.

Hey Dizzy...
Certainly plenty of mysteries around us that we will understand.
Thanks for the visit today, my friend!


Hey Sixbears...
Don't hear too much about them losing track of survivors or crews after the fact. Unusual, for sure!
Thanks for stopping by today!