All over the world, there are things that just cannot be explained in a rational manner.

Tat's the case with the Witches Alarm Clock. Strange happenings occur when the clock is disturbed, as reported in the story from Listverse. Makes for an interesting tale, to say the least. 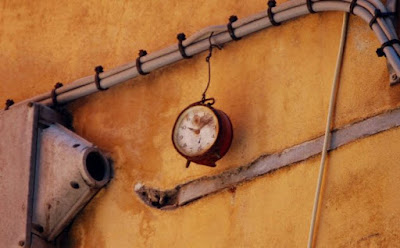 Near the Accademia Museum in the Dorsoduro District, there is something rather odd on the side of an old building. It is nothing but a centuries-old alarm clock. This has raised hundreds of theories as to why it is there, but not one has been agreed on.

The legend goes that an old witch used the clock to mark the time that invoices were due. When she died, no one wanted to live in the house due to their fear of the witch. A nearby merchant asked some workers to put an old alarm clock on the supposedly haunted building as a joke.

When the clock was taken down a few years later, strange things started happening, such as visions and strange sounds during the night. As soon as the clock was put back up, everything went back to normal.

Years later, the clock was taken down again. The odd happenings resumed, including unexplained disappearances of objects and accidents happening around the site. The clock was once again replaced, and these strange events ceased.

The clock was never taken down again. Now it can be found on the side of a house on the Calle della Toletta street in Venice.

Like I said, these types of things happen all over the world. Strange but true!

Coffee out on the patio this morning. I'm hoping the rain has moved on.
Posted by HermitJim at 12:00 AM

Heh, you don't mess with a witch. If I ever go to Venice I'll have to try to see it. You have a great day!

That is very weird. Sure sounds like a haunting to me. I say leave the clock right where it is. Another sunny day here. Yesterday we hit a high of 90 degrees - too warm for the beginning of June. Should be cooler today.

Hope you can dry out for a bit. We are now into heat warnings. while 103 is not fun what will they call it when it hits 110 and above

Hey Momlady...
I'll certainly try and stay on your good side! It would be something to see in person, wouldn't it?
Thanks for stopping by today!


Hey Linda...
I would be in favor of leaving it alone. What can it hurt, right? Better than taking it down, I think.
Thanks for coming over today!


Hey Jo...
I believe it is supposed to rain off and on all week. That's what happens when you live close to the coast, I reckon.
Thanks, sweetie, for dropping in this morning!

Hi HermitJim, it's been awhile since I last visited, but just spend some time reading a few previous posts. Always learn something new from yours, including about the pencil and now this clock! Seems like it should just remain where it is if folks know what's good for them.

Hey Beatrice...
It's always good to hear from you, my friend. I'm happy that I can share something good with you...or at least something interesting. As far as the clock goes, I agree that it should stay!
Thanks for the visit today!