How much do we really know about how some fads got started? Some of them...not so much.

When you study fads like Kilroy, for instance, the history is more rich than you might think. That's the case with many fads and we should try and learn where more of these long lasting fads came from, in my opinon. 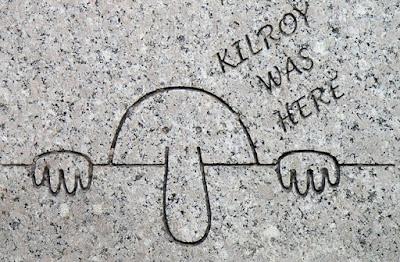 Kilroy has had an interesting history, as have other fads. I'm sure that new ones will pop up all around us before long. Seems to be one of those things we are really good at for some reason.

Coffee out on the patio this morning. There may be a tropical storm headed our way, though.
Posted by HermitJim at 12:00 AM

Always wondered how that one got started. Now I know. Thanks for the info. Beautiful morning here but rain expected in a few hours.

Hey Linda...
Glad I could solve that question for ya. Always fun to find out the history of stuff!
Thanks for stopping by this morning!

I always wondered about Ole Kilroy to now I know. At least he is a funny little guy, not like some crap plastered everywhere.

No open windows or porch time here, can't believe how awful it is outside this morning. Hope it's nicer on the patio.

I loved the Kilroy story when I heard about it as a kid. It was one of those fun little mysteries that took place in a dark time.

Hey Jo...
Glad I could solve that little unknown for ya, sweetie. Pretty nice here compared to your place, that's for sure!
Thanks for dropping by today!


Hey Sixbears...
Certainly gave a little humor to that particular time, for sure.
Thanks for coming by today!