From time to time Mother Nature throws a true mystery at us that we just can't figure out.

Such was the case after a meteorite strike near Caracas, Peru and the resulting illnesses afterwards. Villagers and law enforcement officers alike were taken ill when attempting to discover more about this strange occurrence. 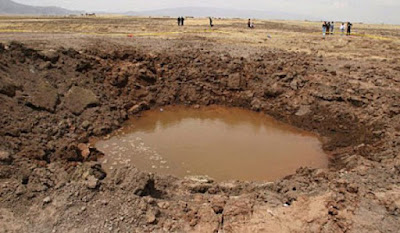 On September 15, 2007, residents of Caracas in Southern Peru, near the Bolivian border reported a massive explosion that rocked the village moments after a fireball appeared in the sky. Soon after, boiling water and steam emerged from the crater formed by the meteorite impact, and a strange smell appeared in the area. Over 200 villagers reported illness, and numerous animals in the village died. Government inspectors and police officers arrived in the area of the impact crater, but were taken ill as well, suffering vomiting. A state of emergency was then declared. Speculation points towards a bizarre reaction of Arsenic, Sulfur bearing rocks and groundwater with the meteorite, causing the village to be bathed in a chemical soup of rapidly forming volatile chemicals at the impact site. It has also been suggested that the Earth’s atmosphere failed to provide protection due to the elevation of the impact.

The article is from Listverse, but it doesn't say how long the illness remained, or how long the mysterious fumes were present. Hopefully it is gone by now and things are back to normal.

Coffee out o the patio this morning. Gotta go in for a check-up at VA later, but there is always time for coffee!
Posted by HermitJim at 12:00 AM

That is so strange. Wonder if they ever figured out what really happened. Thanks for the coffee and good luck with the checkup.

This is a strange one. And that the place wasn't crawling with Scientists from around the world. But yes I'm hoping what ever it was has now cleared the area and everything is OK.

Hope all goes well at the VA today.

Hey Linda...
My guess is that a few gasses combined into a lethal combination and everyone got sick. This one can definitely be blamed on the aliens!
Thanks for stopping by today!


Hey Jo...
I'm sure there were some scientist there, but then again...maybe not. If the were there, bet they got sick as well!
Thanks for dropping in, sweetie!