The Three Hares On Monday Mystery...!

Once in a while, a symbol shows up from all over the ancient world, with no clear origin or meaning.

Judging the distances the images seem to have traveled, one can only guess at why they were considered so important. This is a case that has been studied for a very long time and as of yet, no solid answers have been agreed on. 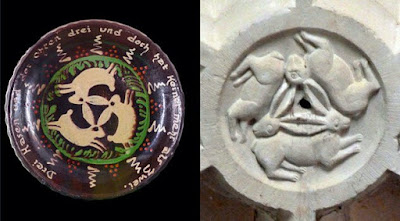 The Three Hares symbol itself is relatively simple. Three hares or rabbits are arranged in a rough triangle so that each appears to have two ears, even though there are only three ears in the design.

The design appears in ancient Buddhist cave temples and on Sui dynasty textiles made in the seventh and eighth centuries. It’s carved into medieval English churches and inscribed on Mongol coins from the era of Genghis Khan. It appears in historic Ukrainian synagogues and the cathedrals of France and Germany.

It’s not clear how the symbol became so popular or traveled so far, and there’s no agreement on what it’s supposed to represent. It may have originated in ancient Persia, where it was particularly popular. But that’s just a conjecture, and the story of the Three Hares looks set to remain a mystery

One more mystery from long ago that we still don't have a clue as to it's clear origin or meaning. You ust have to love a mystery like this!

Coffee out on the patio again today. Hope you don't mind...
Posted by HermitJim at 12:00 AM

Very interesting!!! I love sitting on your patio. Save my spot on the swing.
Very warm here today.

Hey Linda...
Consider the swing reserved. The patio is great, especially this time of the day!
Thanks for stopping by this morning!

Wonder if it has something to do with trinity. Coffee on the patio sounds nice but I'll have to pass today. Mother Nature isn't being kind to me.

Well now all my thoughts just got scrabbled about this as I read on. Just like the lucky rabbits foot. Three rabbits in a pot can probably feed a lot of people. seems rabbits had a few meanings way back then.

Patio time early in the morning is nice maybe we can ponder this with our coffee.

I learned something new!

Hey Momlady...
Sorry to hear that Mother Nature is treating you badly. I'm hoping it's a fleeting thing.
Thanks for coming over today!


Hey Jo...
Sort of a mystery within a mystery, right?
Thanks, sweetie, for dropping by today!


Hey Rob...
Glad I could help with that!
Thanks for the visit today!

Very interesting. Just a coincidence that there are three rabbits frolicking in my yard. Usually just one momma with a tiny baby but today the baby is not visible but there are three identical bunnies; two appear to be playing leap frog. How happy they seem to be. Love you, Bubba.

There was probably a lot more travel and contact in the ancient world than we believe.

In many ancient cultures rabbits are actually Wild Hares and they were and still are symbols of fertility as are chickens that herald the arrival of spring. Hence the Bunny depicted in many cultures with a religious, spiritual and symbolic meaning for rebirth and has even found its way into use by Christians. Celebrating it along with Passover, when it has nothing to do with Christianity. Its straight up pagan.

Hey B...
They must have peeked at my post!
Thanks, sis, for coming over today!


Hey Sixbears...
You are probably right about that. Bet they shared ideas also.
Thanks for coming by today!


Hey Shadowen...
Reckon we will never know the whole story.
Thanks for stopping by today!

I love that design, the way the three ears appear to be two ears on each rabbit. That took some planning and design to do that.