Mother Nature is well known for teasing us with a few strange occurrences, but this one has been around for a very long time.

At least this one isn't being ignored by the PTB, but the Norwegian government has and is doing all it can to explain just what is causing these lights. Good for them! 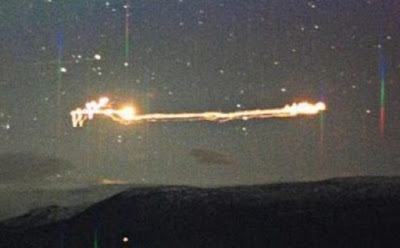 Sightings of this particular phenomenon go back as far as 1811 and occur in the Hessdalen Valley, which is in the middle of Norway. However, in the early 1980s, the lights became much more frequent, with a peak of nearly 20 separate reports each week. Since then, the sightings have decreased in frequency, with observations numbering 10–20 per year. Normally, the lights are either bright white or yellow and hover above the ground.

Various scientific studies have been commissioned to find out the source behind the lights, but no conclusive explanation has been found. (There are cameras stationed around the valley, set up to take pictures of any bright light.) Studies meant to refute some of the findings have pointed out a variety of logical explanations, including car headlights and mirages, though they admit that such things don’t necessarily explain every occurrence.

I think that it's great that the folks in Norway are continuing to study these lights and I do wish them the very best. However, since the lights have been around since the 1800s, I reckon that the answers are not going to be fast in coming!

Coffee inside one more time, due to the rain. However, I do have some oven fresh biscuits and some apple butter I'll share!
Posted by HermitJim at 12:00 AM

I highly doubt that they will ever be able to explain the lights. Probably some sort of cosmic phenomenon. A severe storm went thru here last night - hot and very muggy here this morning. Coffee in the kitchen with biscuits and apple butter sound very nice to me.

I,too, wish them luck although I won't hold my breath until the answer is found. Thanks for the info, Bubba. I have a very good friend from Norway. I am going to talk with her about this just to see what she has heard throughout her lifetime. Biscuits and apple butter sounds delicious. It was 56 degrees when I first went outside this morning. Felt wonderful! Love you.

Those lights have been around a very long time and for science and other researchers not being able to figure it out yet is sure strange. It looks like ball lightening but of course it can't be that.

Off for labs this morning see what new old people stuff I have these days. So you might have to save my biscuits and coffee for me.

Hey Linda...
I have no idea what is causing this, but it will be interesting to know if they find anything.
Thanks for stopping by this morning!


Hey B...
You'll have to let us know what she says. As far as temps go. we won't see that kind of temps until the Fall or Winter, I'm afraid.
Thanks, sis, for coming over today!

Biscuits and apple butter - count me in! And the lights? I'm ready to accept we're not the only ones here ...
Big hugs

I net a family from Norway today, with I'd read this sooner!

Hey Jo...
Just remember to think young! Can't hurt, right? I'll save ya a biscuit!
Thanks, sweetie, for dropping by today!


Hey Sis...
We used to have them all the time, remember? I can remember having apple butter fritters as well!
Thanks for coming over, sis!


Hey VW...
Yeah, you could have asked them what they knew about the lights. That would have been cool!
Thanks for the visit today!

Reminded me of the Brown Mountain lights in the Blue Ridge Mountains of western North Carolina.
https://en.m.wikipedia.org/wiki/Brown_Mountain_Lights