Say what you want, but I don't want to have this critter anywhere near me...regardless how harmless it is!

Mother Nature must have designed this one to be a star in some horror movie, for sure. I'm thinking that I would have nightmares for a while if I saw one in person, ya know? 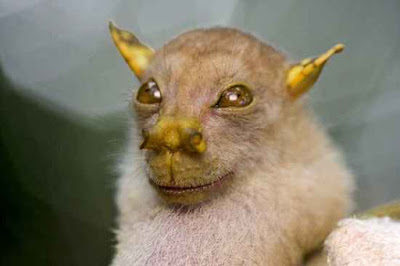 Found in the rain forests of the Philippines, this endangered bat has one of the strangest faces among mammals. Its dark ears covered in yellow spots, crazy orange eyes and, especially, it’s tubular nostrils, give it an almost cartoonish appearance. This bat feeds mostly on figs and other fruit, but has been known to eat insects on occasion.

I swear this thing reminds me of a Dracula movie, especially in it's face! Tell me you don't see the resemblance!

WOW! Looks great! I have not seen it before:)

I'm not sure I'd want one in my back yard. Coffee sounds good. Send some sunshine this way, please.

Nothing cartoonish about that face. It looks down right evil to me. I know I would be running and screaming if I saw that one. Got the lawn mowed (grass was over 6 inches high) yesterday. Today is sunny and the A/C people will be here to fix my A/C , thank God.

Hey WW...
Not a face you would soon forget, I reckon.
Thanks for stopping by this morning!


Hey Bigfoot...
You're right! It does look like him. I saw the film, too!
Thanks for coming over today!


Hey Momlady...
I certainly would pass on having one in my yard. Sunshine is on the way!
Thanks for the visit this morning!


Hey Linda...
I had the AC guy out the other day to work on mine as well. Gonna need it this year, for sure!
Thanks for coming over this morning!

Something mystical about that thing, but still wouldn't want to have it flying around me anytime soon.

Well it's fry an egg on the sidewalk time here 104 yesterday and 106 expected for today. See you on your patio.

Hey Jo...
Not quite that hot here, but getting close to the 90s mark. Luckily, we have a nice breeze off the coast, so it isn't that bad yet.
Thanks, sweetie, for dropping by today!