Space Can Be Strange...!

Just when you thought that space wasn't much of a mystery anymore, along comes this little tidbit. There is a Bermuda Triangle type area out there as well!

Now not only do the folks at NASA know about it, but certain precautions are made to avoid the area. Better read the article for yourself to understand it. 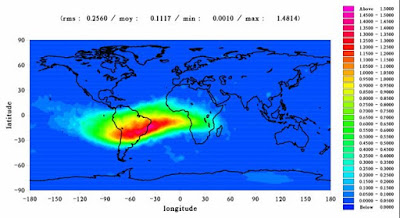 Did you ever wonder if there was a Bermuda Triangle in Space? No? Well you’re probably wondering it now, and you’re in luck! Because there totally is, and it’s called the South Atlantic Anomaly. The SAA is the area where the band of radiation known as Earth’s inner Van Allen belt comes closest to the Earth’s surface.

It’s an area centered just a bit off the coast of Brazil, and it’s responsible for numerous problems with satellites and spacecraft, from messing up their programs to actually shutting down their function. The Hubble Telescope is actually turned off from taking observations when passing through the Anomaly, and the International Space Station avoids scheduling spacewalks when passing through it (which happens up to 5 times a day). It’s not just technical problems, either—some astronauts report seeing “shooting stars” in their visual field as they pass through.

The cause of all these problems isn’t fully understood. The main suspect is the high levels of radiation that accumulate at the anomaly, but scientists aren’t sure exactly how or why the effects occur. So let’s just pin this one on aliens.

Pretty strange, don't you think? I think I'm fine not really knowing the cause of this. As they say...Ignorance Is Bliss!

Coffee out on the patio one more time. Hot weather is coming!
Posted by HermitJim at 12:00 AM

Another reminder of how much we don't know!

Hey Momlady...
Seems like it must be, for sure!
Thanks for stopping by today!


Hey Linda...
Seems that we all agree this time. What else could cause it, right?
Thanks for coming by this morning!


Hey Rob...
That's for sure, buddy. Starts to add up, doesn't it?
Thanks for the visit!

There is so much out there yet to be learned.

Patio it is yes the heat is on its way. We have had 2 days under 100 but windy. Today 92 then back into the hundreds.

We can't solve all the mysteries on Earth, so why try to solve the many, many mysteries out there in the universe?