Ray Spider And It's Slingshot Web...!

I did a post here while back about a spitting spider, but this guy beats the spitter all to pieces.

Using a spider silk slingshot, he traps his prey while they fly by. Pretty neat trick, considering that the spider just senses when it's prey is starting to fly by. How he does that is still unknown, but it works pretty well! 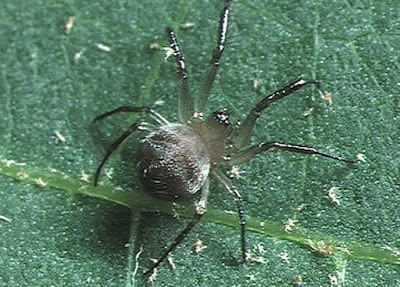 We’ve known about ray spiders for nearly a century, but little research has been done on them. The few species that we do know about are found all over the world, so it’s no surprise that this little Amazonian acrobat escaped the attention of mainstream science for so long. It’s been tentatively identified as the Naatlo splendida species by the graduate student who first observed it, but nobody’s quite sure about that, either.

What they are sure about is that the thing can put on a heck of a show. Rather than sit in its web and wait for insects to fly into it—like most web spinners—this ray spider has turned its web into a slingshot net that can nab insects out of the air.

The spider first spins its web like normal, but then it attaches a secondary string to a rock or branch behind the web. When the spider sits in the center of the web and reels in the string, the web stretches back like a rubber band. Whenever the spider senses an insect approaching (nobody’s figured out how it does that yet), the spider releases the string and shoots the web—with the spider still attached—into the oncoming insect.

The slingshot web is only about the width of a man’s palm, but that seems to be perfect for catching mosquitoes, which usually fly too slowly to stick to a spider’s web.

There is a video on YouTube that shows the slingshot web in action, if you want to see it. Just search for Ray Spider!

Better have our coffee inside today as the rain from the tropical storm in the Gulf is getting pretty wet!
Posted by HermitJim at 12:00 AM

Wow, that is something else. If we could figure out the spiders sensor system, just imagine what we could do with it. then again maybe i don't want to think what man would do with it. Coffee around the kitchen table sounds fine. I'll bring some donuts.

Hey Linda...
We would probably try and make a weapon out of it. We seem to do that a lot.
Thanks for stopping by today!

Something new to me, never have heard about this little guy, going to have to look this up.

Coffee in the kitchen sounds OK with me.