Ever notice how the PTB always seems to have a ready answer or explanation when something unusual happens somewhere?

It happens more than we can imagine. Not only here is the states, but all over the world. Here is an example of what I'm talking about...from Wales, of all places! 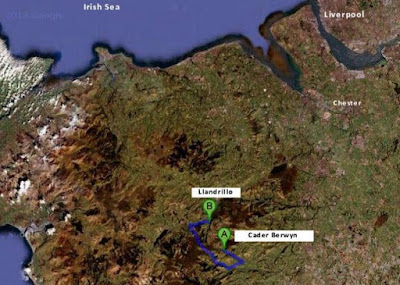 In January 1974, many reports were received of an enormous bang, tremors that shook the Earth, and a blazing light above the Berwyn Mountains in Wales. As many left their homes when they felt the tremor, they saw a blinding light on the mountainside.

Some people thought that a plane had crashed into the mountain. However, others described the light as a “pulsating orange-and-red glow.” When police searched the area, nothing was found, leading certain people to believe that a UFO crash had been covered up.

According to the official explanation, a meteorite had coincidentally crashed into Earth when an earthquake occurred. While this seems logical, many skeptics continue to believe that something else took place on the mountain that night.

I find it a bit strange that this sort of thing continues to happen even today. Sure makes a lot of coincidences, if you believe in that sort of thing.

Coffee in the kitchen this morning. Showers are expected again!
Posted by HermitJim at 12:00 AM

Labels: Do you believe this explanation

Sure sounds like a UFO to me. Why can't the PTB just admit that there is life elsewhere in the Universe?

Hey Momlady...
Yeah, it really does!
Thanks for stopping by today!


Hey Linda...
They are keeping it secret from us for our own "protection." They don't want us to panic!
Thanks for coming by today!

Hmmm another good one to ponder this morning. I could have gone right for the meteor crashing if they hadn't thrown in the earthquake. Meteors can be quite large and cause very deep holes. We have all seen or read about them. So know I might have to give thought to UFO.

I'm up for the kitchen pass the pot please

Hey Jo...
Yeah, sure are way too many things happening all at once to just be a simple explanation by the PTB, I think. Sure smells like some kind of cover-up.
Thanks, sweetie, for dropping by today!