There are a few towns right here in our great country that have had some really terrible disasters befall them, and most have never recovered.

The town mentioned here, Centralia, is one I'm sure you must have heard about before. Fire has been raging underground there for many years and, as of yet, no one has any idea on how to stop it. 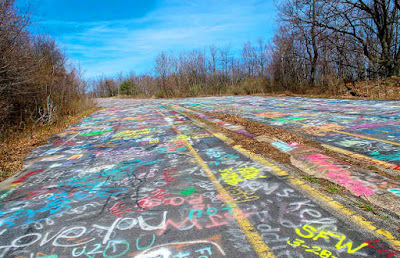 In 1962, officials decided to burn a huge pile of trash at Centralia’s dump. Unfortunately, the town’s dump—and much of the town—was located on top of an abandoned coal mine. After the fire had consumed the trash, it ignited the leftover coal.

The fire began to spread throughout the mines. Carbon monoxide started to seep up from the ground, and people began losing consciousness in their homes. Sinkholes and cracks appeared throughout the town. After a 12-year-old boy fell into a burning sinkhole in the 1980s—he survived—authorities intensified their efforts to douse the fire. Nothing worked. The government realized that they could not stop the fire, and they relocated the residents.

Today, the town is nearly abandoned, and the fire still burns. The fire has consumed much of the mines: it destroyed all of the mine’s timbers and bracing. Parts of the mine could collapse at any moment, which makes the ground above dangerous to walk on. Even Centralia’s air is deadly. Sulfurous steam blows out of hundreds of fissures and holes in the mud. The gases poison the air, and they can suffocate a person.

There is a list of other toxic ghost towns, many here in the states, over on Listverse if you would like to take a look.

Coffee is gonna be out on the patio again. Soon we'll have to go inside due to the heat and the humidity.
Posted by HermitJim at 12:00 AM

I lived near there and used to drag race on that section of highway. Yes I was much younger. But in answer to the questio ... I remeber it well!

We too are having to shorten our porch stays in the mornings with summer slithering back. At least my tomatoes are still producing for now.

I remember when the story first came out. Quite a surprise. Guess the PTB forgot about the mine and its location. Getting hot here, too, so all outside work has to be done before the sun gets too high.

Sad story.
I'm up in Oklahoma (right now) & the heat & humidity are a good reason to go inside after the coffee!

Hey Bob...
Much nicer place back then, I reckon.
Thanks for stopping by today!


Hey Bigfoot...
Glad the tomatoes are holding up. Love those home brown tomatoes!
Thanks for coming over today!


Hey Momlady...
Poor decision to build a fire right there. Guess they are paying the price now.
Thanks for the visit today!

Hey Rob...
Yeo...that's Summer in the South for ya! Oklahoma is almost as bad as Texas!
Thanks for stopping by today!

I do remember this story. Can't believe that it's still burning, sure must have been a lot coal still down there and yet it had been abandon. Sad how man has created such a mess out of this beautiful planet.

Yes early morning outdoor activities and then hide in the house. So far no humidity which is what still gives up the cool mornings.

I find your posts very interesting and informative but sometimes the old adage "ignorance is bliss" comes to mind. Strange how a state as small as Pennsylvania can be so beautiful in some areas and not so much in others. Makes one wonder how many secrets Texas holds, you know? Love you, Bubba.