As sad as war can be, it is often even sadder when animals are used as weapons or are placed deliberately in harms way during fighting. Some of the most celebrated of these animals were the famous Carrier Pigeons. 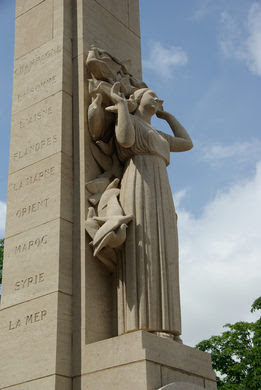 This statue honors the thousands of Allied avians that served and died for France during World War I.

In 1936, the Fédération Nationale des Sociétés Colombophiles erected this monument in honor of the 20,000 pigeons who served and died during the Great War. It also commemorates the pigeon fanciers who were executed at the hands of enemy forces for their involvement.

During World War I, the birds swooped through the skies as part of their missions to transmit key intelligence information. Forces on both sides of the war attempted to control these skybound messengers. In German-occupied territories, civilians were ordered to shoot pigeons to reduce the presence of any Allied avians.

One of the most famous French carrier pigeons who served during the Great War was a bird named Valiant. Though he had been badly injured and gassed, he managed to deliver a message from the ill-fated French troops at the Battle of Verdun before later perishing in his dovecot.

Like it or not, the truth is that animals have been used for weapons of war for as long as mankind has been fighting amongst ourselves. Sad but true...
Posted by HermitJim at 12:00 AM

Then there's Cher Ami. A most famous carrier pigeon wounded but successful in delivering a critical message during the Meuse-Argonne offensive in October, 1918, helping save elements of the US 77th Infantry under Major Charles Whittlesey, the famous "Lost Battalion." Her story used to be taught to school children (I remember one teacher talking about her) and her taxidermied body is in the Smithsonian.

I guess they have their place, but I could be the one to send or receive messages from them:))

I remember reading about these birds. It is sad they were used in this fashion but still were a vital means of communication.

Hey Beans...
A fine example of an animal helping in times of war.
Thanks for stopping by today!


Hey Gorges...
I appreciate that, sir.
Thanks for coming over today!


Hey Mamahen...
They certainly earned their spot in the history books.
Thanks for the visit today!


Hey Linda...
A very valuable tool during that time of conflict.
Many thanks for stopping by today!

Don't forget the horses, mules, dogs, etc. Through out the ages and many wars, a lot of animals lost their lives in battle.

This is one statue that pigeons won't desecrate!